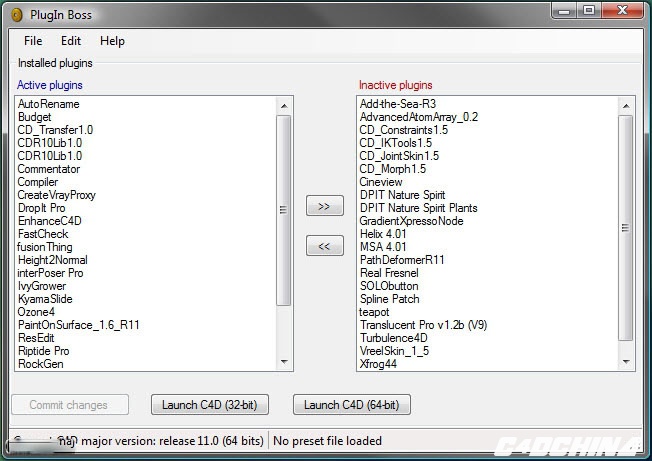 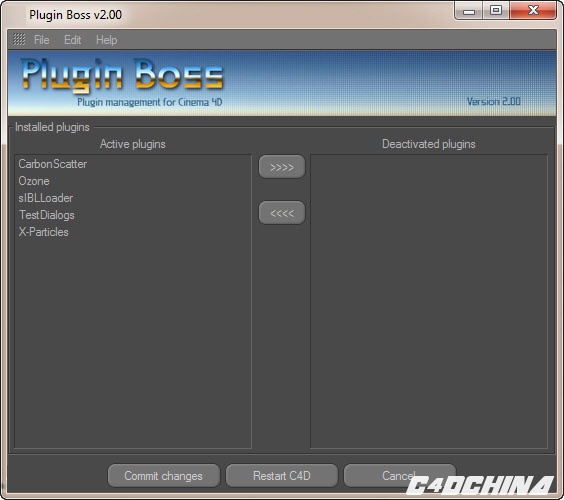 Plugin Boss is a plugin to enable better management of Cinema 4D plugins.

Ideally, we’d all like to be able to load and unload plugins as needed from within C4D itself, but the plugin architecture apparently makes that impossible. So if you want to ensure that Cinema will (or will not) load a particular plugin, you have to exit Cinema then either rename the plugin files so that Cinema will or will not recognise the plugin, or move the folder containing the plugin into or out of the plugins folder inside the C4D program folder. Either way, it’s time consuming and boring, so you probably don’t do it… which means that you have a lot of usually unneeded plugins loaded, or perhaps you never load the plugins you may have paid good money for.

Plugin Boss changes that. It can’t get around the problem of having to quit and restart Cinema but it does make the activation and deactivation of plugins easier.

The current version of Plugin Boss is 2.01, released September 12th 2013 under the GNU General Public Licence.

Version 2.01 has been recompiled for compatibility with Cinema 4D R15. The original version 2.00 ran in R15 but did not recognise Python plugins with the extension “pypv”. That is the only change in version 2.01.